No, sir, it is not accurate to call Michael Jackson the greatest entertainer in the world. He Was the greatest entertainer in the world back when he was still entertaining, but now he is just a plastic pop has-been who dangles his own babies around and probably touches other people’s babies in bad ways. And steals Beatles music. And co-opts the cause of struggling artists and their copyright struggles. And dresses really badly.
With his birthday celebrations today, he added yet another adjective to his name. Jackson is now 50, which makes him an OLD plastic, baby-dangling, bad way-touching, Beatles catalogue-stealing, copyright cause-co-opting, pop has-been.

To underscore the enormity of this event namely, Jacko making it to 50, let’s look at what 50 means.
A few other people who are 50 years old. 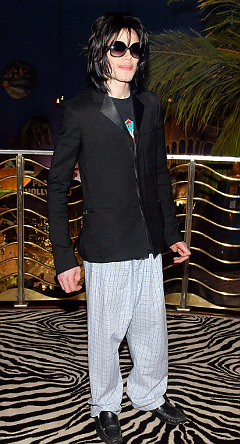 You see? 50 is the age of Amanpour, Mac and that doughy lesbian from the Emmys. I had a point early on when I started this post, but now I cannot remember what it is.  Take this guy’s point instead.

On Madonna, MiJack and some other guy turning 50

And now to more important things. Obama .. I mean, Ominde:

This, ladies, gentlemen and others, is Sheila Ominde, the Kenyan contestant, if they can be called that, in the Big Brother house.

Sheila cusses virulently and many of you will concur: that is a very agreeable trait in a young lady. I find myself in full support of this girl and wish her the best.

I was showing you Sheila.

After being a foul-mouthed Kenyan babe and pulling all the accolades that brings, however, Sheila turned around and disappointed her fans marginally, when it was revealed that she is, in full, Sheila Ominde and is a former Miss Tourism Kenya.

Life is messed up, people. I mean, you put yourself out there, you dare to trust, you believe in someone and then they turn out to be a former beauty queen.

Because I have no TV (ref Crime Rate) I cannot offer updates of Big Brother Africa III.
Not unless I make them up, as I shall now proceed to do.

The housemates gather for their first dinner inside the new Big Brother house. Everyone sits around a heavily laden table. Tawana, who is sitting at the head, raises her hands, palms upward, and says in a solemn tone, “Before we start, let us hold hands and bless the meal.”

Until she grins. “Just kidding, guys. Hah. Got you.”

A unanimous sigh followed by a round of laughter.

Uti belches loudly and drops his hand to his belt. After a single deft gesture he has his large belt clip open, his fly unzipped and his belly is able to escape from confinement. “That was good food,” he says.
Sheila repeats the first word she uttered when she entered the house. “Fuck!” she says.
Uti, speaking drowsily, replies, “You misunderstood the reason I undid my fly. It’s because I am full. Maybe later.”

Sheila is disgusted and walks away from the table to join a gaggle of other housemates who have drifted towards the fridge. She leaves Morris at the table. Morris is looking at Uti enviously. “How did you do that?”
“How I opened my fly so fast and with only one hand?”
“No, I mean how do you repulse women so fast? I am a pretty boy so I don’t know how to do that.”
He then adds, “Shwinggg!” and walks away, too.

Mimi’s head is literally inside the fridge. She is that eager for a drink. Takondwa is looking at her bum.

Munya and Lucille are having a conversation. “As I said in my intro montage,” Munya brags, “Zimbabweans are the ultimate hustlers.”
“Do you really think that is the best thing to say to the rest of Africa about Zimbabwe?”
“Why? What’s wrong?” he continues grinning because he really doesn’t know what is wrong.

Update: Is it a bird? Is it a plane? Is it a tall lanky middle-class blogger with a fancy phone? The last one! It is the last one! It is internet superhero FunnyMan (Becaue people have looked at him before and said, “Heh heh. You’re funny, man!”) He has the actual real recaps. This shit is so good, you guys should be paying for it. Send me airtime at least.
Take it away, son.

An international television event is going to happen this weekend that will call my patriotism to question so I think I should act now to forestall any criticism.

By saying that I don’t even like sports by the way, but I am very proud of our
team.

Too many people seem not to be. I am sure this is not a consensus opinion, but it is a loud opinion and it has been too prominent. Sceptics have referred to our team’s performance using terms like “dismal” and “hopeless” and such and
you would think, after hearing all this, that the team will fly back home on a late plane so they can sneak in quietly and not have us see them troop in with their heads hung in shame.

They are more deserving of such welcoming hordes, after all.

If you went to the Olympics, raced, came in last, then returned to Uganda, you still have the right to brag like a rapper. Because you are a fucking Olympian.

An Olympian. What about.

When Big Brother starts, my support will go to the prettiest housemate, not to the Ugandan, but don’t call me unpatriotic for that.

Kasita I supported our Olympic team.

Cooking isn’t as easy as they make it look on television (for those who have televisions. For those who don’t, refer to those who do) and one can be fooled by a fortuitous burst of beginner’s luck to think one has a knack for this sort of thing only to be brought crashing back down to the ground when one’s second meal of spags comes out bland and under-salinated and tasteless and as much fun as eating wet sweaters.

So I put aside the spags for my third attempt at self-cooked supper, and instead opted for something I figured only a piece of useless fake talentless unkitcheworthy shat could mess up: French Toast.

I beat four eggs and soaked three slices of bread and concocted and mingled and salted and fried and, a few minutes later, realised that I was a useless fake talentless unkitcheworthy shat.

I have one more option, but am wary about it. I, and you, may think it is impossible to mess up a salami/ham sandwich, but I wouldn’t bet on myself.
But enough about me.  Let us turn our collective attention to issues of national interest. People in the news.

The new Miss Uganda  plans to take a radically different approach to her job than the one taken by her predecessors. In an interview with Pidson “P-Diddy” Kakaire of Saturday Vision, Miss Dora “Uganda” Mwiima said this:

“I plan to live an exemplary life that will make me popular and important to society.”

As opposed to every other beauty queen Uganda has ever crowned, who becomes irrelevant the moment the punters who attended the ceremony drive out of the parking lot.

I think the words of a prominent scientist can be applied to Miss Ugandas. “It’s very pretty, but what does it actually do?”
But enough about her.

I succumbed to statistics last week. Someone entered my home while I was at work and snuck out with my television, leaving me with nothing but a contribution to the crime rate.
I will not say “rising” crime rate because I have read the letters to the editor pages and know how easy it is to presume that just because your personal crime rate has risen the same applies cross-country.

So for a week now I have been sans idiot box. You can see the effects. I am already getting smarter. I speak French now.

Things I don’t miss about TV—

Humpy Kay. Humpy Kay is a hyperactive video jockey from Record TV who always wears large sunglasses, moves like Kermit the Frog, and barks. That is to say he emits frequent yelp-like ejaculations of “Yah! Yah! Yah!” throughout the show, a spastic tourettes sufferer. I really keep thinking somebody should call a doctor. He looks like he needs help.

Things I do miss about TV? I would have liked to see my friend Beti Kamya on the TV news. Did she say, “I have had it with FDC and their lies. I gave them some of the best years of my life. After all the bullshit I spewed on behalf of those ingrates this is how they treat me?”

Eventually I will break down and go buy another set, but in the meantime, let’s see just how clever I can get.

P.S. For those who know themselves, I finally got something to put on http://neverman.wordpress.com

Our computer network is down right now, which can only mean one thing:
Random Thurrogits.
First up on the itinerary is some insightful commentary on international news affairs.

It’s a story about a woman in Russia who asked for a divorce from her husband after his penis extension broke off during sex.

Prepare yourselves for some sex-puns, because this is the sort of story that breeds them like flies.
Grogory Toporov had visited Russian doctors to have a prosthetic extension attached to his comrade after his wife complained that “I don’t know. I just need more from this relationship.”

If that pun was too subtle, how about:

He went to great lengths to make her happy.
And
He went the extra inch.

After receiving his surgical augementation he must have ran to his beloved shrieking, “Is sexy time!” because it would make sense to say that all people from former Soviet Republics talk like Borat.

It turns out, though, that in some ways Russian technology hasn’t improved much from the way it was during the soviet days, and like a ….. Grigori’s device malfunctioned drastically at a crucial moment.

To be more precise, it fell off.

“And his thing just toppled-off?”
You see, the world was not through with the puns.

But the soon-to-be-former Mrs Toporov had had enough of not having enough and is insisting on a divorce.

From Where it all started, originally uploaded by bazanye.