I have been on leave and, as elaborated in my previous post, been broke, so I have not had a lot of time on the internet with the rest of the world. This therefore caught me by surprise. I just walked into the internets and look what I found in my news inbox: From the Ghanaian news editor of AfricaNews in Accra came this story, headed:

I did a double take, because I thought for a moment I had misread the words and the sentence, which would be correctly read as “Miniskirts rock in Uganda” or “Rows of miniskirts in Uganda rock”, came out skewed.

Nope. “Heated debate” has apparently “erupted,” says the story, on “whether women should be banned from wearing tight miniskirts in public or otherwise.”

I would expect heated debate to erupt on permission to wear tight miniskirts in public or otherwise if it were, say, Capital FM deejay Alex Ndawula in question, but women? Why should we do anything but encourage them heartily?

This reason has been given by the cabinet minister responsible: Hot chicks are a traffic hazzard, he says.

“The country’s ethics and integrity minister s spearheading the call because women wearing them distract drivers and cause traffic accidents.”

Him again. Lord. Does this guy ever do anything except just sit there and ask for it?

“You can cause an accident because some of our people are weak mentally. If you find a naked person you begin to concentrate on the make-up of that person and yet you are driving.”

James didn’t answer the obvious question: Why not just pull over and park, you moron?

Nsaba Buturo is flying the Ugandan flag high, representing this great nation all over the world wide web, ensuring that this noble republic gets a mention in “Wierd News” “Oddly Enough News” and “Funny News of The Day” segments around the globe. They are even making fun of us in Zimbabwe, Banange!

(right at the bottom)

And who would have thought Buturo would get on BET before Bebe Cool?

“The BBC notes that Buturo is seeking to rid Uganda of its many vices, and inappropriate dress is just one of the many indecent items that appear on the minister’s list. Among others are theft and embezzlement of public funds, sub-standard service delivery, greed, infidelity, prostitution, and homosexuality. But I guess miniskirts were the low-hanging fruit.”

I need a drink.

But before we close, there is a quote from a pro-miniskirt activist in the story that started it all: 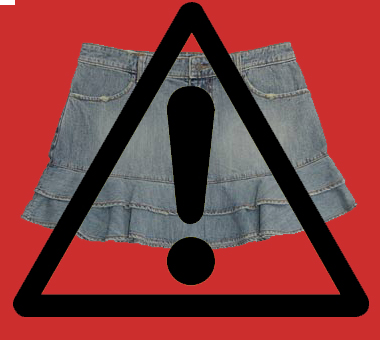 “I wear miniskirts a lot. I am not comfortable in long skirts because I have nice legs. The only thing that makes me comfortable is miniskirt. I don’t support it (ban), where are we going to put them because we have bought them and those selling them have paid taxes on them too,” young Sylvia stated.